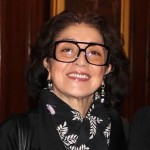 Pianist Eteri Andjaparidze has performed on the world’s most prestigious concert series as guest soloist with major orchestras and leading conductors, as well as in solo and collaborative recitals.

Andjaparidze has served as Head of the Keyboard Programs and Professor of Piano at DePaul University in Chicago, the State University of New York, the Moscow Tchaikovsky and Tbilisi State Conservatoires, and conducted master classes worldwide. She is currently teaching on the piano faculties of NYU Steinhardt and Mannes School of Music and is Visiting Professor at Foshan Liu Shi-Kun Music & Art School in China. A Steinway Artist, she is founder and artistic director of “The United Sounds of America” music festival and the AmerKlavier Studio.

Born to a musical family in Tbilisi, Georgia – her father, Zurab Andjaparidze, the leading tenor with the Bolshoi Opera and mother, pianist Yvetta Bachtadze, a student of Alexander Iokheles from Konstantin Igumnov’s piano lineage – Andjaparidze studied at the Moscow Tchaikovsky State Conservatoire with Vera Gornostaeva, a student of the legendary Heinrich Neuhaus. She was the youngest participant to receive Fourth Prize at the Fifth Tchaikovsky International Competition in Moscow and the first Soviet pianist to win Grand Prix at the Montreal International Piano Competition. Her recognitions include the International Friendship Order, Georgian Order of Honor, and People’s Artist of Georgia title.